FGCU continuously monitors the latest information from health officials and shares details on the Coronavirus Updates website. Get details including helpful FAQs. Students, faculty and staff, remember to complete the FGCU Daily Health Screening App every day before coming to campus (239-590-1206 for technical and other support related to the Screening). COVID-19 rules apply to campus visitors.

This website stores cookies on your computer to improve your browsing experience. The university does not collect personal information as you browse. Learn about our Privacy and GDPR statements.

The Center provides programs and materials that stimulate interest and promote public awareness of local and global issues related to science, environment, engineering and mathematics.

The Whitaker Center works with all types of students in K-20 STEM education environments to engage them in inquiry, interdisciplinary learning, and research experiences. 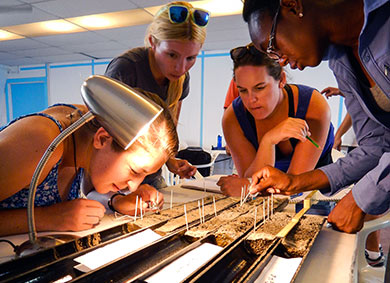 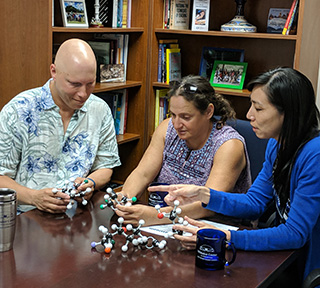 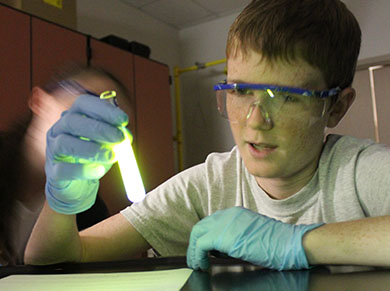 Current and Past Projects and Grants

A gift supporting the Whitaker Center is an investment in Florida’s future in STEM Education. Gifts can be tax-deductible and can be made online or through the mail.  FGCU accepts Visa, MasterCard, Discover, and American Express. 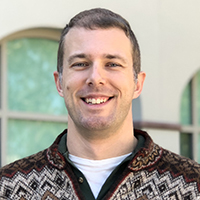 Brian arrived at FGCU in 2012, following the completion of his Ph.D. in Mathematics at the University of Nebraska-Lincoln in the same year. He earned his B.S. in Mathematics, with honors, from North Dakota State University in 2006.

From his first semester at FGCU, Dr. Johnson has been involved with the Whitaker Center for STEM Education at FGCU, and after a long stint on the Leadership Team, he has assumed the role of Interim Director. He was part of a small team that secured an NSF grant in 2013 to begin the STEM Professional Academy for Reinvigorating the Culture of Teaching (SPARCT) at FGCU. Close to fifty of FGCU's STEM faculty have gone through this academy, which aims to improve and expand the use of evidence-based practices in STEM classrooms. In summers since 2014, Dr. Johnson has been part of a team that facilitates the Schulze Summer STEM Institutes for K-12 Teachers. These are week-long professional development workshops that seek to improve the use of inquiry based practices in K-12 classrooms across Southwest Florida and beyond. In their current form, they are supported by a large private donation from the Richard M. Schulze Foundation. Another major partner is the Conservancy of Southwest Florida, which provides classroom space and a perfect location for the majority of the workshop.

In his own classrooms, Dr. Johnson uses Process Oriented Guided Inquiry Learning (POGIL) and other active pedagogical tools in order to create a student-centered learning environment and build habits of lifelong learning in his students. He is also a trained POGIL workshop facilitator. With Dr. Katie Johnson, he has coauthored a textbook of Finite Math (MGF 1106) POGIL activities that are in the final stages of publication.

Dr. Johnson’s scholarship encompasses faculty professional development in STEM, commutative algebra, and the scholarship of teaching and learning in mathematics. Some of his projects with students have included: zero-divisor graphs of graded rings, hyperbolic geometry, and jigsaw sudoku puzzles.

For cardio in his free time, Brian chases his two young sons, Lucas and Leif. 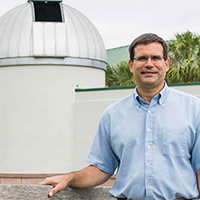 Derek received his undergraduate degree in physics from the University of Chicago, and his PhD in astronomy from Penn State University. He has worked at a variety of institutions, including the National Center for Atmospheric Research, Johns Hopkins University, the California Institute of Technology, and the University of California at Berkeley. Most recently, he served for ten years as Professor of Physics at the US Air Force Academy. Derek has published more than 120 papers, and has also worked on a variety of major instrument teams, including Detector Scientist for the Cosmic Origins Spectrograph, part of the Hubble Space Telescope's most recent upgrade, and Principal Investigator for the Wide-Field Infrared Explorer satellite. He currently serves on the Science Team for NASA's planet-finding Kepler mission.

Derek's research interests include almost anything having to do with stars. He began by studying various aspects of stellar (and solar) activity, such as spots, flares, and winds, and has done both observations and theoretical work, including radiative transfer modeling and magnetohydrodynamic models of stellar flux tubes. More recently, he has moved from studying stellar atmospheres and environments to studying stellar interiors and convection through the use of asteroseismology. Derek also works on computer modeling, particularly of nonlinear systems, and is co-author of the chapter on Computational Astrophysics in the CRC Computer Science Handbook.

Derek is also a reserve Navy Engineering Duty Officer with the rank of Commander; his current assignment is with Pearl Harbor Naval Shipyard in Hawaii. In his free time, he enjoys sailing, swimming, and reading, along with just hanging out with his wife Heather and son Grant. He is excited about becoming part of FGCU and advancing the teaching and learning missions of the institution.